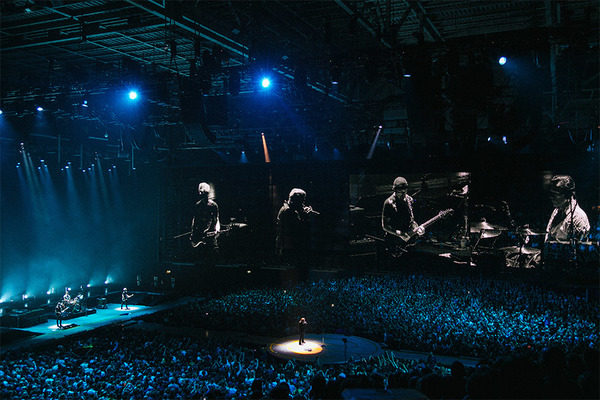 'The most visceral and uncompromising show U2 have played in Dublin since War'.

Donal Scannell, who first saw U2 in Croke Park in 1987, reports on the band's opening night in Dublin with the #U2ieTour.

The whole of Dublin spoke of only one thing these past few days and Bono's Instagram of the four pints of Guinness on the counter of Peter's Pub on South William St. Words will never convey how much that image resonated here.

'The Boys Are Back In Town' and Adam from Malahide is wearing a Thin Lizzy Tee-shirt. He's joined as always by Larry from Artane, Edge from Malahide and Bono from Ballymun.  A band from the north-side of Dublin called U2.

"This is a family function",  Bono proclaimed after a blistering opening which brought us from 'The Miracle (Of Joey Ramone)', through 'Electric Co.' and onto 'Vertigo' in quick succession.  Tonight they felt like they'd been written in the same year. Not decades apart.
"We are all together," Bono continued, "All the relations from all over the world."

U2 and Ireland are family. We love each other through thick and thin. It's hard to convey the depth of the relationship but every Irish person gets it. A lot has gone down since U2 last played in Dublin.  It's been a hairy few years and last week was one that we'll still be talking about for decades to come. U2 offered up much needed succour tonight but it wasn't sugar-coated.

Belief and passion shone through but tonight's show was without doubt the most visceral and uncompromising show U2 have played in Dublin since 'War'.

Almost everyone in the room knows the Ireland U2 came from. It was a bleak place with no prospects that was cut off from the world.

With 'Iris' we get a glimpse of the pain that drove these four to make something of themselves beyond our beautiful island.

"It's a strange thing for a grown man to say", Bono offers as introduction, "That losing my mother aged 14 was what sent me on the path with these three guys."

Leading into 'Song For Someone', Bono pays the first of many tributes to Ali as he brings our attention to the screen, "That's me aged 18 playing a guitar my brother Norman gave me. Writing a song to impress Alison Stewart. Still working on that one, but she's here tonight."

Adam has taken Sunday Bloody Sunday and re-worked it as one of the funkiest dub cuts you've ever heard. It still sends shivers down the spine though as we confront our past.  We sing our hearts out as decades of pain is represented in Oliver Jeffers' stylised re-workings of Belfast's tribal murals.

'Raised By Wolves' is in many ways the emotional fulcrum of the show. It recalls the unresolved Dublin and Monaghan bombings of May 17th 1974. The bloodiest day of the 'Troubles'. The haunting face of a deceased toddler stares out from the screen. One face amongst many victims U2 force us to remember 41 years later.

It seems like every week there are new faces now destined to stare out at us from screens. Lives frozen forever as terror takes them at random. 'Bataclan' was the word not mentioned that was on everyone's mind. Music lovers have been attacked and being here amongst family helped. A lot.

From Monaghan to Baghdad, from Beirut to Paris there's a line of suffering that U2 help us process. Understanding what it's like to live through tough times defines this show.
It's a theme returned to towards the end as we're stunned into silence by the footage of Kobanî in Syria. A city devastated.

The associated #refugeeswelcome graphic gets one of the night's biggest cheers.

This was a show that combined not just iNNOCENCE and xPERIENCE, but also pain and joy.
In Ireland we combine sadness and elation. Funerals are as ecstatic as weddings. We 'carry each other' through light and shade.

We bopped like born again teenagers as the band played 'Pride' for the Heaney family. For Seamus Heaney, who was our greatest living poet the last time U2 played Dublin. For those he left behind.

This night wasn't morbid. It was a wake up call. We need to prioritise. Hold close what's precious, look out for those that need our help and celebrate the very fact of being alive. An emotional night with a simplicity and punch that won't be forgotten quickly.

So much about last night couldn't have happened anywhere but Dublin. At one point Edge leaned over to Bono and reminds him to thank "Fr. Crosbie for the use of the hall". It's a throwaway line that would take about a thousand words to explain.

That's the greatest thing about being amongst family. You don't have to explain yourself.

As Bono had put it earlier, 'Do you know what? We've spent the last nine months travelling the world trying to explain the Northside of Dublin to people. But we don't have to do that tonight because tonight we are here...'

A whispered 'Oiche Mhaith' serves as a goodbye. 'Good Night' in Irish but there's lots lost in the translation.

It's a blessing you use for those you truly love. 'Oiche Mhaiith U2' we whispered back, meaning every last syllable.

Were you were in the hall for the opening night in Dublin? Tell us what it was like and post your photos here.

Donal Scannell first saw U2 in Croke Park in 1987. He's written about the band for many publications, including their own magazine 'Propaganda', and was heavily involved in their 'Kitchen' nightclub. You can find him on Twitter @donalscannell or via www.snowfurnace.com