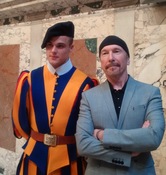 Edge has become the first rock star to play in the Sistine Chapel in Rome, taking part in the Cellular Horizons conference at the Vatican on regenerative medicine.

Backed by a choir of seven teenagers from across Ireland, Edge covered Leonard Cohen's 'If It Be Your Will'  along with 'Yahweh' and  'Ordinary Love' . He dedicated 'Walk On' to Pope Francis, "the people's pope", saying he was "doing an amazing job, long may he continue".

The student choir, led by Dawn Kenny, were part of Music Generation, an initiative - backed by U2 -  involving philanthropic, government and local community support, which provides music tuition for young Irish musicians.

"When they asked me if I wanted to become the first contemporary artist to play in the Sistine Chapel, I didn't know what to say because normally when I climb on stage there's this other guy doing the singing," Edge joked. 'So I had to think before accepting, which I did, for at least 30 seconds."

"Being Irish you learn very early that if you want to be asked to come back it's very important to thank the local parish priest for the loan of the hall."

He then thanked Pope Francis and Vatican officials for "allowing us to use the most beautiful parish hall in the world."

The three-day conference, which was addressed by U.S. Vice President Joe Biden, was organized by the Stem for Life Foundation to share ideas and treatments on the use of adult stem cells to cure rare diseases.  Since 2007 Edge has been a board member of the Angiogenesis Foundation which works to 'improve global health by advancing angiogenesis-based medicine, diet, and lifestyle.' Angiogenesis is the process of the growth of new blood vessels.

"I can tell this is a really cool audience, because normally when I mention angiogenesis people's eyes glaze over," Edge said. "But you all understand what I am talking about."
Introducing Ordinary Love, he paid special tribute to his father Garvin who passed away last week.

"I want to dedicate this next song to my father, who passed away last week.He was supposed to be with us here today. He is here in spirit, represented by three of his granddaughters, Hollie, Arran, and Blue and his daughter-in-law Morleigh. My father lived for 10 years after being diagnosed with colon cancer, they were great years, made possible through the miracle of medical science. For this and all the amazing doctors and nurses who ministered to him right up to the end including, Dr William Li, and Dr Stan Natin, my family and I give thanks."

Read more about The Angiogenesis Foundation.

Comments
13
You must be a logged-in member to add comments.
SIGN IN / SIGN UP
VeronicaCamarotti
09 November, 2018
Mencap
Hello Edge, my name is Veronica Camarotti, I'm very much a fan of your band, I've been to two concerts in São Paulo, but I did not have the opportunity to meet you in person, but okay, I continued to follow you from afar, now I'm very present on this new tour, which will end in Berlin
Miroslav_III
15 May, 2016
r. i. p. ...
r. i. p. Garvin.
mooner
11 May, 2016
Pride, In The Name Of Love...
So Proud of The Edge... what an opportunity of a life time. But a great man like "The Edge" deserves this recognition, and for such a great cause as well...
drea05
10 May, 2016
Our star- The Edge
It's so wonderful to be part of the U2 FAMILY!! I am so proud of you Irish Boys!! Thank you for being angels in your lives!!! From a brazilian fan that is waiting for iNOCENCE + eXPERIENCE TOUR here in Brazil, please!!!!!!!!!!!!!
DonnaO\'Neil
09 May, 2016
Holy Rock Star!
Holy Rock Star! Congratulations to the Edge on rocking the Sistine! I bet God and Adam's fingers actually touched when you played.
alx69me
07 May, 2016
Wow!
If only those negative people in this world, knew what U2 have done and do for others around the world. They would stop and respect the unconditional love and support that these fine Irish Men have. Thank you The Edge, Bono, Adam and Larry! Alex "PW"
Throbo
06 May, 2016
Magnificent!
Once again U2 and its grounbreaking style and love for there fellow man is recognized by World Leaders,this time The Pope. The Edge is the best. God Bless you and your family after the loss of your Father.
spinningheadnl
06 May, 2016
Wow...
Amazing performance Edge, well done
fabioangioletti
04 May, 2016
Amazing!
Magico Edge!!!
GeorgeZambra
04 May, 2016
mmm...
mmmmm....
ESorensen
03 May, 2016
U2: completing what we promised God we'd
As these guys enter into a new season in their personal, professional and spiritual life I believe we'll see them living out even more of what Bono notes as one of the band's most frequently read Psalms: 116, "I’ll complete what I promised God I’d do, and I’ll do it together with his people.” As we age and we recognize our time is increasingly finite, I believe we become increasingly focused on what ultimately matters the most to us in this life. Can't wait to see how this is reflected in their music and mission - the former always being the vehicle for the latter.
JACK1978
03 May, 2016
VATICAN ADVENTURE
Another great experience for a U2's member !!!!
Malahide
03 May, 2016
Great
Edge playing four acoustic songs in the Sistine Chapel backed by a choir of Irish youngsters is great. An amazing initiative. U2 is breaking new ground again.
Newer comments    1 - 13 of 13    Older comments