'We get to carry each other…'

'We get to carry each other…'

'From this Irish-American president in a White House designed by Irish hands, I want to thank U2 for all you have done,' said President Biden, at the White House reception ahead of the Kennedy Center Honors ceremony. 'You really make a difference.'

'At a moment when there's too much hate, too much anger, too much division here in America, and quite frankly, around the world, we have to remember today, as their song goes, 'We're one, but we're not the same. We get to carry each other.'

Each year The Kennedy Center Honors celebrate five artists, 'living individuals who throughout their lifetimes have made significant contributions to American culture through the performing arts'.

'We had big dreams and like so many people in Ireland, America was the focus of those dreams' recalled Edge at the Awards Ceremony, remembering that the band played their first US show 42 years ago on 6 December 1980. 'There is such a close bond between U2 and this country, and we can't fully explain it but since that very first gig, we've always felt warmth and love, but this tonight goes way above and beyond.'

Actor Sean Penn read the citation for the band saying it was 'entirely fitting that America bestows its highest honour in the creative realm on these four scrappy Dublin punks'.

According to Kennedy Center chair David Rubenstein, U2 'won over America and the world long ago with their iconic anthems, potent lyrics, and powerful messages of social justice and global citizenship'.

In return the band acknowledged their 'four-decade love affair with the country and its people, its artists, and culture… we consider America to be a home away from home and we are very grateful to the Kennedy Center Honors for welcoming us into this great clan of extraordinary artists.'

The roll-call of past recipients for the awards - which began in 1978 - includes Ella Fitzgerald, Frank Sinatra, Aretha Franklin, Bob Dylan, Julie Andrews, Johnny Cash, Diana Ross, Brian Wilson and Joni Mitchell. And while it's unusual for non-Americans to be honoured, U2 join a select band from overseas including the Who, Sean Connery, Luciano Pavarotti, Paul McCartney and Andrew Lloyd-Webber.

The 45th Annual Kennedy Center Honors airs in the US on CBS on December 28.

Comments
1
You must be a logged-in member to add comments.
SIGN IN / SIGN UP
rob_leingang
27 January, 2023
Congratulations U2
So very well deserved guys! Looking forward to the next time we're all in the same building. This year marks the 40th anniversary of my 1st live U2 show and I'm still hungry for more ❤️ 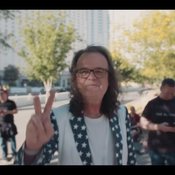