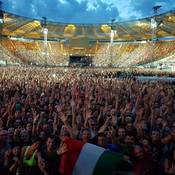 When & Where
Saturday, June 15th 2017, Olympic Stadium, Rome. Night 25 of #U2TheJoshuaTree2017
"Sometimes it's luminous figures that change the world. But in truth, more often than not it's mass movements that change history."

Set List
No major surprises tonight, although Mysterious Ways drops out and back in at the close comes new song 'The Little Things That Give You Away'.
Aaron Govern (@Ivanobe) was at the Joshua Tree Tour first time round, and sent us through some reactions straight after the show: 'What an incredible night - following what must have been the hottest day of the tour so far, having hit the highs of 36°C. It has been so hot even the historic statues of Rome have been begging for a respite from the overhead heat on this beautiful cloudless sky.
Italian fans may be the most passionate in Europe, and at times it really was hard to hear the band play over their incredible singing. Larry kicks off the night with the familiar military beat of Sunday Bloody Sunday, before the urgent playing of New Years Day, and then a most beautiful rendition of Bad, a song so steeped in history in the U2 canon it cannot fail to tug at our heartstrings. To finish off Act 1, the resplendent Pride, and everyone is singing at full volume, urging and pushing this band to the next level.
The Joshua Tree is played to a transfixed audience, each song being performed by the band as if it's the first time they have ever been played. Side 2 starts and Bono is clearly enjoying the reaction from the crowd who are singing each song with such passion. The darkness surrounds the stadium, and Mothers Of The Dissapeared closes the album playback. A beautiful ending to a beautiful album….'

Social post
@atu2 - 'The best way to get U2 to play for your wedding is to get married at the show' - which one happy couple did, wedding and reception with (however many thousand) guests. And quite a decent wedding band to boot!'

If You Had To Pick One Song
With Or Without You. Fans come together and hold each other up when the band is in town. We saw it in Berlin earlier in the week when German fan site @U2Tour came together to party and celebrate fans visiting that city - 500 showed up at their party at legendary Meistersaal, (Hansa Studios, where Bowie recorded Heroes, etc) and raised over 5000 Euros for the charity Doctors Without Borders.
Tonight it was Italian fan site @U2Place that had organised a flash mob at the Olympic Stadium -  40,000 signs held up in unison to hold up The Joshua Tree, and the number 30. Spectacular, spectacle, fans coming together and holding the band up, holding each other up. As we are all doing every single night of this tour.
Long time Zootopian Monica Martino, now living in Dublin was at the show and kept us updated: 'U2 in my hometown is always special. My band in my town. Starting with SBS is a shot to your heart. The screen getting red for Streets because as we love to say Streets può essere solo rossa. The legendary choreography from U2place.com on WOWY. ITALIA Ireland, one family, the family. Larry sexy man!. Dancing time, jump jump jump like there's no tomorrow...'

Review on U2.com
maurizioinga1: EXIT 'Maybe, the most emotional U2 concert that I've ever seen. During the permonce of EXIT I reached one of the most intense moment of my life. Thank you guys. Love U2 forever!!!

If you were at the show, tell us all about it. Add your own review and photos on our tour pages.