Mar
1
2006
Buenos Aires, AR / River Plate Stadium
2
share
The 3D cameras were here tonight, suspended over the stage so you couldn't miss them, and this Argentinian audience looked like they knew they were going to be famous.
'Hola Porten-yos!
Hola Argentinos!
Hola Chicas...'
Wow, the reception to that alone gave the show lift-off and then we were higher than the sun with  Elevation, and soon lost in a lyrically customised Beautiful Day.
'See the world in white and blue
Buenos Aires right in front of you
From the Pampas to Patagonia
Tierra del Fuego, Rio Parana
Argentina is in motion
From the Andes to the ocean
See the bird with the leaf in her mouth
After the flood all the colours came out...'
With Edge and Bono out on the b-stage for the first time, the crowd were chanting, 'Ole, Ole, Ole... Bo-no, Bo-no.'
'I love The Edge,' says Bono, before introducing Sometimes - 'para mi padre' - because he loved his dad too. It's a huge performance and surrounded by  crowd and cameras on the b-stage the 3D filming is proving quite a spectacle.
'Love and Peace' read signs in English and Spanish, jostling with  Argentinian flags and sure enough here is Love and Peace, cameras sliding along the dolly track set up along the front of the pit. Now the chants are for 'Edge, Edge, Edge' as Sunday Bloody Sunday breaks into the night sky. 'Sing for us' invites the singer and the audience oblige.
A searing performance of Bullet the Blue Sky, all the more potent for its peculiar meaning in this part of the world, runs into snatches of Johnny Comes Marching Home and The Hands That Built America and then we are soaring again with Miss Sarajevo, one of the great surprises of the whole tour.
A moving spoken introduction heralds the arrival of One, a song which is finding new audiences at present, following the band's Grammy duet with Mary J Blige and its release as her current single.
'If you come from a small country like Ireland,' raps Bono.
'Argentina is a very very big place
But our countries have a lot in common
The most important thing is
The difficulties of our past
Will not prevent us making a better future
If we work together
Left and Right
Rich and poor
Old and young
If we act together
As one...'
And we are one as the lights bathe the stage in yellow, the images of the  band members hang on the video screen and 'One' - in many languages as at the Grammys - lights up the smaller screens.
'Gracias Franz Ferdinand,'  sings Bono, reminding us of the very fine support act we have in South America. 'Muchos gracias Buenos Aires..'
Returning for an encore, the band bursts into 1991 with Zoo Station, The Fly and Mysterious Ways,  Adam walking out in front of a wall of static, Bono dancing his way down stage left. For The Fly Mark Pellington's hurricane of words and phrases are translated into Spanish and the band are almost performing too each other, to the delight of the audience.
The night closes on a surprise.
'Love is blindness, I don't want to see
Won't you wrap the night around me?
Oh, my heart, love is blindness....'
And the night is wrapped around us and a memorable show draws to a close. 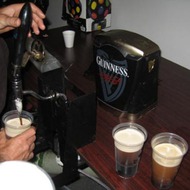