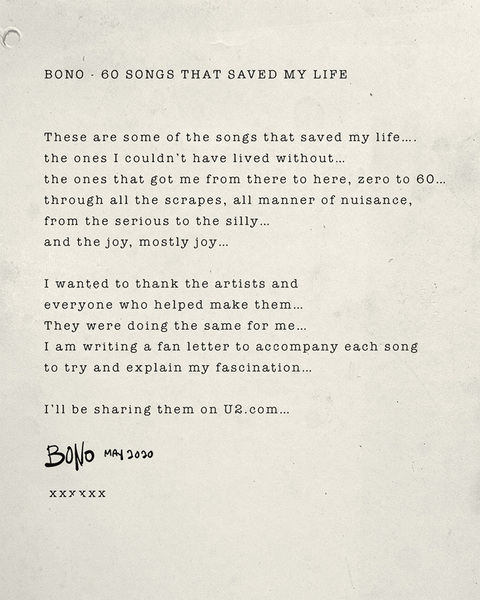 '60 Songs That Saved My Life’
To mark his birthday, a special playlist from Bono... and words of gratitude.

Play Bono's '60 Songs That Saved My Life' below or click to listen on your preferred music service.

'These are some of the songs that saved my life,' writes Bono, as he shares a special birthday playlist titled '60 Songs That Saved My Life'. 'The ones I couldn't have lived without… the ones that got me from there to here, zero to 60… through all the scrapes, all manner of nuisance, from the serious to the silly… and the joy, mostly joy.'

The four hour plus playlist stretches from the formative 45s of his teenage years to later collaborations with some of his heroes, as well as tracks by younger artists like Billie Eilish, the same age now, 18, as Bono when he wrote his first song.

Long before he was making music, he was a music fan and along with these 60 songs he's penning a series of letters to their creators and family members.

Bono is sharing the first six letters today, with more coming in the week ahead.

Writing about ‘Miserere' to Alice, daughter of Luciano Pavarotti he says, 'I can hardly remember what it was about... other than forgiveness that is… and a toast to being alive.’

To Billie Eilish (and Finneas) he says, of ‘everything i wanted’, ‘I step inside your song and it’s a black beauty, achingly awesomely vulnerable and terrifying, fearliess and worrisome… but you are not worried by all that.’

Writing to Duncan, son of David Bowie, he recalls, 'When I heard your Dad's song LIFE ON MARS? on the radio in 1973, I was hiding under the covers of my bed in 10 Cedarwood Roadlistening to a pirate radio station called Radio Caroline. I wasn't thinking about the question mark in the title… I wasn't bothered about the dramatic inquiry “is there life on Mars?”… The song was answering a much more important question when I was 13… Is there intelligent life on earth? It was proof as far as I'm concerned.'

To the members of Kraftwerk, who lost Florian this week, Bono recounts how 'The Man Machine' stole his heart and mind as a teenager. 'I gave Ali a copy to romance her on her 17th birthday in 1978… NEON LIGHTS is a song that brought into being a future that has now become so familiar, it is easy to forget just how strange it was.'

And to Shara Nelson and Massive Attack, he sends gratitude for Safe From Harm, 'Thanks for giving me permission to not fully let go of the rage behind all vulnerability… it can propel.'

Read each letter in full in our gallery above - we'll be adding to it over the next few days.

Play Bono's '60 Songs That Saved My Life' here or click to listen on your preferred music service.

Add your reactions in the comments below.