Hard as it is to believe, in November we marked the thirtieth birthday of Achtung Baby.

(Although not as hard to believe as it had been the month before, when we marked the fortieth birthday of October. )

Arriving a couple of years after the band had vowed to go away and 'dream it all up again',  Achtung Baby was a promise kept and the record was widely seen as a sonic and visual reinvention.

As Miriam Jonker posted on our earlier story, 'I loved this album from day one and it is still the album I listen to the most. Excellent capture of the zeitgeist at the time and a great reinvention of U2….'

Or as pawel_peczak added, 'No one has ever recorded anything like Achtung Baby before, after and ever after. It's a masterpiece. Reflects the whole generation. It's Yellow Submarine of the 1990's. Its new Europe, unified. It's personal story of love and divorce, love hurts, love loves ....so emotional. It changed my entire life forever...'

But let's imagine you're making your own playlist of the band's finest songs and you can only choose THREE songs from any one album… what are the three songs from Achtung Baby that you could not live without?

Vote for those three in our poll…  then tell us why in the comments below.

Comments
190
You must be a logged-in member to add comments.
SIGN IN / SIGN UP
RVATOMMY
22 January, 2022
My U2-3
Uno/One Dos/Even Better Than The Real Thing Tres/Until The End Of The World Honorable Award - Zoo Station, because of the way it rocked my ears the first time I listened to it.
spot63
21 January, 2022
My 3 Achtung Baby songs
1 - So Cruel 2- One 3 - Who's Gonna Ride your Wild Horses Looking forward to the live recording of So Cruel. Have attended 7 shows the past 34 years, and never heard this song performed live. Possibly my absolute favorite U2 song
GreatGonzo
21 January, 2022
Three songs from Achtung Baby that you
This is terribly hard but here goes: 1) Until The End of World - Makes the list thanks to all the amazing live performances. Larry's baseline is haunting, Edge is at his angriest yet melodic and the lyrics carry the impending doom that you realize is all around you and ending in a fury. 2) So Cruel - One of the most underrated in the the U2 catalog, sadly not performed enough live. The tragedy in this song can be lost in the melody and tone. The pain you can't quit always hurts the most. 3) One - Can't leave off one of the best songs ever written. Performed live, it brings it's own sense of spirituality that is unforgettable. There are few better - from anyone.
juleschka82
21 January, 2022
Acrobat, Even Better Than The Real Thing
Aaahhhh It's not really possible for me to choose 3 songs
scuderia156
21 January, 2022
3 best of Achtung baby
1/Ultra Violet, 2/Acrobat, 3/Love is blindness
TOMAHAWK4
20 January, 2022
Achtung Top Three
1. Zoo Station 2. Until The End Of The World 3. Even Better Than The Real Thing 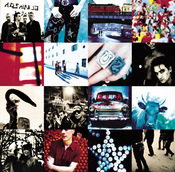