31 Jan 2011
share
U2 will perform at Magnetic Hill Music Festival in New Brunswick at the end of July with special guests Arcade Fire.

Live Nation Global Touring in association with Donald K Donald Events and The City of Moncton today confirmed that U2 will come to Atlantic Canada for the first time ever.

"The Moncton show is set to be the final date of the U2 360° Tour in North America and we're really looking forward to bringing this now legendary 360 production into Atlantic Canada for the first time," says U2's manager Paul McGuinness.

Tickets for the show go on sale to the public next Tuesday, February 8th but U2.com subscribers can enter a special advance presale beginning this Wednesday, February 2nd (10am) and running until this Friday, Feb 4th (5pm)

All subscribers will be emailed ahead of this presale with more details and unique ticketing codes.

Interested in becoming a U2.com subscriber and entering the ticket presales to see the band at the Magnetic Hill Music Festival ? Here's all you need to know - including news of 'U2:Duals'. This is a limited edition CD, not for sale at retail, featuring U2 collaborations with other artists.

Having just completed their sold out European tour, along with stops in Australia and New Zealand, U2 360° will visit South Africa and South America before arriving back in North America in May. By the time it reaches Moncton, U2 360° will have been seen by over 6.5 million fans.

"To say that we're excited about welcoming U2 to Moncton is an understatement," added Moncton Mayor George LeBlanc. "Our Magnetic Hill Concert Site has seen some outstanding artists over the past five years, and the 2011 event will be no exception. To host one of the biggest bands, on one of the biggest stages, as part of one of the biggest tours for their final North American date is an honour."

With a cylindrical video system of interlocking LED panels, and a steel structure rising 150 feet from the floor over a massive stage with rotating bridges, the band has truly created an intimate 360° experience for concertgoers. Long-time U2 Show Director Willie Williams has worked again with architect Mark Fisher (ZooTV, PopMart, Elevation and Vertigo), to create an innovative 360 design, which affords an unobstructed view for the audience.

"There is no stadium big enough in Atlantic Canada" said Donald K Donald, "so we will build one and they will come. The impossible will become possible. Moncton will host the last North American U2 360° Tour date and it promises to be the biggest and greatest entertainment spectacle in Atlantic Canada history."

Montreal's Arcade Fire has followed up their smash albums "Funeral" (2004) and "Neon Bible" (2007) with the now three-time Grammy Award nominated, "The Suburbs" (2010). Debuting at #1 on the U.S. Top 200 and selling 475,000 copies and counting, "The Suburbs" has been nominated for Album of the Year, Best Rock Performance By A Duo or Group, and Best Alternative Album. This fiercely independent band has faced pressure from every corner of the music industry, but they carved out something beyond the grasps of the major label system with great success, a combination of Internet word-of-mouth and old-fashioned live show impressions.

Joining U2 and Arcade Fire on the bill will be up and coming rock band, Carney. Carney's first full length album, entitled "Mr. Green", was released in May 2010 on DAS Label/Interscope. For more information on Carney, please visit www.CarneyTheBand.com.

Public on sale of tickets for the U2 performance in Moncton will begin on Tuesday, February 8th at 10am. Reserved grandstand seats will be available at $29.50, $99.50, & $199.50, while general admission tickets are $65.00 each. A limited number of Red Zone tickets will also be available at $275.00. All tickets include taxes but are subject to applicable service charges. Purchase all tickets online at www.Ticketmaster.ca and www.Livenation.com with some general admission tickets available at Needs Convenience Stores across Atlantic Canada, the Moncton Coliseum Box Office or charge by phone at 1-888-720-5600. 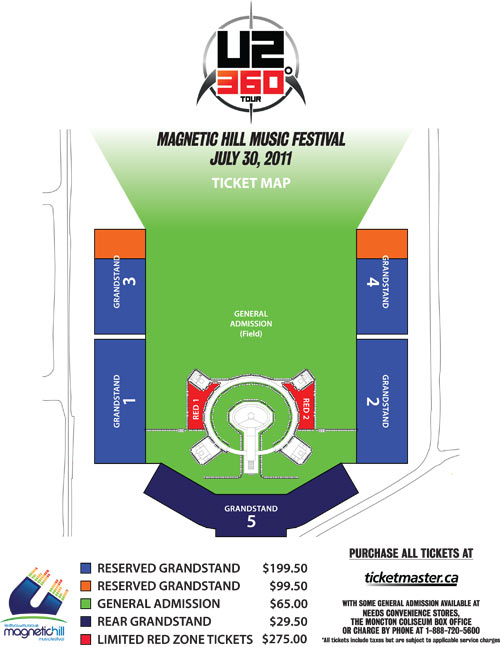