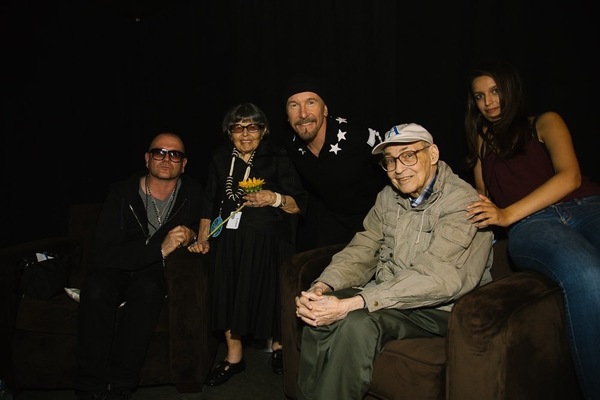 Edge and Bono have been paying tribute to the great Marvin Minsky, mathematician, computer scientist and widely regarded as 'the father of Artificial Intelligence.’

Marvin, who passed away last week at the age of 88, often crossed paths with U2. Edge recalled that he and his wife Gloria came to several shows.
'Marvin and Gloria always came to see U2 when we played Boston, including the most recent I&E shows, when this photograph was taken. He was the personification of curiosity. He proved the axiom that we don't grow old - we get old when we stop growing. He remained alive to new ideas and intellectually energized to the end.
'A true gentleman genius who had a major influence over the development of the personal computer as one of the pioneers of Artificial Intelligence. His work in the 1950's trailblazed the course of digital technological advancement for the next half a century. He also played a mean piano. We will miss him greatly.’

'Marvin, so down to earth but never brought down to it.’ added Bono. 'His ideas slowly landing on people like myself and so many others...ideas that will give us flight.’