'An evening of words, music and some mischief…'.

Live Nation and Penguin Random House have announced a 14-date city book tour in support of SURRENDER: 40 Songs, One Story, the forthcoming memoir by Bono.

The book tour, titled 'Stories of Surrender' and produced by Live Nation, is a limited run of theatre dates to mark the release of a memoir in which one of the world's most iconic artists writes for the first time about his remarkable life and those he has shared it with. Bono will bring the stories of his life to life — live and in person— to 14 cities across North America and Europe.

"I miss being on stage and the closeness of U2's audience," said Bono. "In these shows I've got some stories to sing, and some songs to tell… Plus I want to have some fun presenting my ME-moir, SURRENDER, which is really more of a WE-moir if I think of all the people who helped me get from there to here".

TICKETS: Tickets go on sale starting Friday, October 7 at 10am local time and will be available at: www.ticketmaster.com/bono.

Each ticket purchased comes with a copy of SURRENDER, released on November 1, and all tickets purchased online will be delivered as secure mobile tickets. There will be a two ticket limit per person.

SURRENDER: 40 Songs, One Story, tells the story of Bono's remarkable life, the challenges he's faced, and the friends and family who have shaped and sustained him.

The subtitle, '40 Songs, One Story,' refers to the book's 40 chapters, each named after a U2 song. Bono has also created 40 original drawings which will be featured throughout the book. In his unique voice, Bono takes readers from his early days growing up in Dublin, including the sudden loss of his mother when he was fourteen, to U2's unlikely journey to become one of the world's most influential rock bands, to his more than twenty years of activism dedicated to the fight against AIDS and extreme poverty.

Writing with candor, self-reflection, and humor, Bono opens the aperture on his life—and the family, friends, and faith that have sustained, challenged, and shaped him.

Comments
55
You must be a logged-in member to add comments.
SIGN IN / SIGN UP
tonycarney
07 October, 2022
Bono in the UK
Got tickets, cant wait to see Bono on the 19th in Manchester, Its gonna be a brilliant night listening to the person who has been my hero,
fender35
07 October, 2022
I will Follow
Manchester Apollo 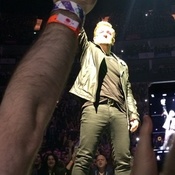 mailers
07 October, 2022
1 ticket
They where very fast sold out, We couldn't get 2 tickets, only 1.
mondane
04 October, 2022
Wicked Awesome
Been waiting for this book to come out and now there is an evening with Bono! this is going to be epic! I hope everyone that wants to go gets that opportunity!
utwogirl
04 October, 2022
Excited!
So excited yet the U2 fan nervousness about possibly not getting tickets has set in! This is the only band that does this to me
ramblinghorse
04 October, 2022
So excited!
I am so thrilled to hear about Bono's book and tour! I'm preparing myself in advance for tickets for this to be sold out but hoping there will be some available! Can't wait to read the book and hear his stories!♥️
laurabeaulieuezzell
04 October, 2022
My Husband will love this!!
This is truly exciting. My husbands favorite icon and you are coming to Nashville on his birthday…November 8th! I hope to get some tickets and surprise him. It will be an awesome night. A night he will remember forever.
Lauri21
04 October, 2022
Anticipation to the MAX
So looking forward to this experience!
conor kavanagh
04 October, 2022
Brilliant News
Can’t wait, and if I can get tickets. It will be great to see him in Dublin his home town. And on another note I am beyond thrilled that finally U2 will be this years Kennedy Centre Honers 2022
Deanomc3
04 October, 2022
So hope to get tickets
This sounds like it will be one of the best nights ever - to hear Bono reading and singing in such intimate venues will be amazing
Delpheprivate
03 October, 2022
Stories of surrender Paris
Bono You have so many talents, i hope to have this chance to exchange a few words with you if I go to Paris the 25th November. Love your personality like billion of people Keep making us dream You are the best thing happen to us Delphine
Boy1970
03 October, 2022
Nothing can stop this being the best day
Great event is announced. Within an hour after announcement, my phone started receiving text- and whatsapp messages from fellow fans... Will we be able to get tickets... Although it will be cold outside this Thursday and Friday, it will get hot in here when ticket sale starts...
Selene11
03 October, 2022
Bono
So excited! Fingers crossed!!!!
LucyBanaszewski04
03 October, 2022
I’m so excited!!!
Can’t wait !
Bucko
03 October, 2022
Ticket Limits
This is superb news. It’ll be a wonderful night Is the 2 ticket limit per show or for the whole tour?
ronnieyoe269
03 October, 2022
Needed this Today!
Amazing news! Should be a great night of music and stories. Thank You B!
renejr
03 October, 2022
Moment of Surrender!
Spectacular news! Looking forward to seeing the world's greatest vocalist as he journeys to become the voice of the world's greatest band!! "Every breaking wave on the shore, tells the next one there'll be one more..."
Belinda0871
03 October, 2022
Thanks
Thanks for the news.
Jason21sayers
03 October, 2022
Jason sayers
Fingers crossed one of these shows really really hope we get a ticket
Val58
03 October, 2022
Excited
I’m so excited for Bono and his book. I pre- ordered months ago from the Publishing house. I’m going to NYC to see and hear him at the New Yorker Festival. Now that he’ll be book touring, I’ll have to see him in SF IN November! Very cool
ktelerin
03 October, 2022
Surrender 14 City Tour
So excited about this. Hoping to score some tickets for the Boston stop!
sesews
03 October, 2022
suzysolt
OMG, my anxiety kicked in until I get secured tickets. Fingers crossed!!!
vicki10
03 October, 2022
Missing Out
I live in one of the best places in the world, Australia, but our remoteness means we miss out on sooo much, of the best band in the world U2, All the one offs, spontaneous appearances and random events. Enjoy ur privileges Europe, UK and US Feeling sad
u2freak74
03 October, 2022
Heart Attack ❤️
No I got a HEART ATTACK!!!! ❤️❤️❤️❤️❤️❤️
Cruel
03 October, 2022
Book tour
Hope I'm one of the lucky ones to get a ticket to a show.
Newer comments    31 - 55 of 55    Older comments