30 May 200911
share
The band were guests of Pat Kenny last night, his final appearance presenting The Late Late Show. As well as playing Magnificent and presenting Pat with some leaving gifts, they had a revealing conversation which touched on the upcoming production, how they once nearly parted company with Paul McGuinness, what it's like to bring a tour home to Ireland and how U2 is a 'family business' built on disagreement.

Here's a few choice highlights - you can watch the extended interview (when we last looked) here.


The guitar they presented to Pat
'It's a guitar made by Gibson. There's only 300 of them in the world and it's in aid of a charity that I co-founded for New Orleans, for the musicians of New Orleans. So it's very rare.' (Edge)

The new show
'For a long time we said to people within our production team we love it when we have people all around us, which we do sometimes indoors, but we never had it outdoors. Can you help us figure it out?' (Edge)

'People used to say that outside of Ireland the best place to see U2 was Madison Square Gardens and that's where you play in the round up at one end and our audience say that's the best seats... and it feels like you're on stage sort of thing. And so we wanted to see could we apply this outdoors. Of course how do you hang the gear from the sky so to speak? So the engineering is to allow us to do that." (Bono)

'We haven't seen it yet but we've seen some footage of it as it's been built in Belgium and I have to say I looked at it today and thought, 'Oh my God we've actually designed the Eiffel Tower!' It's this huge thing. It's pretty amazing.' (Edge) 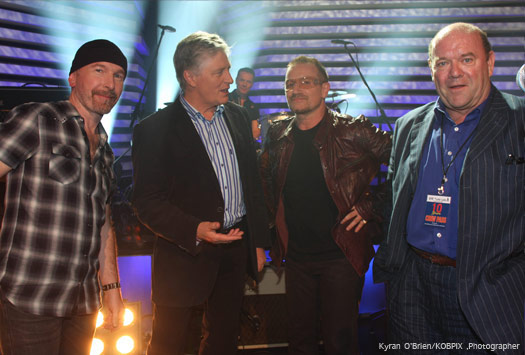 Almost parting company with Paul McGuinness
'... there's a story... that we've never told, but there was a serious disagreement early on about his ability to get us a van. And there were negotiations and deals over getting us a van and he said he could get us a van, but maybe we weren't good enough and this kind of thing. So we met in Captain America's and we had a pow wow with the band where we discussed firing him. And we went through the ups and downs of it all and we were there for about an hour and this fella just walked up from the next table and he said look I'm really sorry to say this but I couldn't help but overhearing what you were talking about and I actually know the person you were talking about. And I had that sinking feeling, and he said this is a really, really big mistake. This is exactly the right manager for U2. You should really work it out because this is a great great guy. And I said, 'Who are you?' And he said, 'My name is Louis Walsh.' (Bono)

Playing Croke Park
'Expectations are always high, particularly in your homeland, but you know that's what we do. We fly the flag wherever we can. And nowhere prouder than in our homeland. So you take the pressure on, understanding that your family and your friends are expecting great things. They hear about all the stuff you do around the world and they want you to come home and show that you can do it for them as well.' (Larry)

Bigging Up Ireland
'Larry was saying just a few days ago...I thought it was smart... that we have to, wherever we go, whether it's Barcelona, whether it's Chicago, just tell people about this little gem, this little jewel on the north Atlantic and how extraordinary its people are and how innovative and how smart they are and they'll get their way out of this mess. We're just going to tell them that nightly.' (Bono)

Getting On
'It's like a family business. I mean it's like being in business with your four brothers. So we're four brothers and it gets rough. As Adam has explained there's matters of personal hygiene.' (Bono)

'I think bar the odd gust of wind, hygiene in cramped small places is very important. We’re used to being in small little vans and travelling around the country.' (Adam)

'And then there was the lemon. That was a very cramped place.' (Edge) 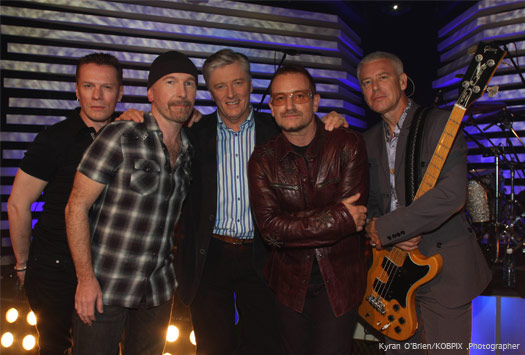 Depending on each other
' Just having the loudest voice and the most persuasive tone does not mean it's the best idea, sadly. And that's why we're a band. We very much depend on each other and what we've learned to do is... the individual egos are sort of subservient to a band ego which is pretty big. But that's the way it works, so if the idea is a great idea we soon forget who had it or where it came from, and I would say all four of us win the day on different things.'

Politics
'I think U2 was always interested in politics. I think that's where we came from. In 1976 Dublin was a very different place than it is now. It was in a recession... and when we heard punk music that was an opportunity for us to do something, to get involved and to be part of a thought process that was about changing your world and changing the ideas in your world and that is something we've carried through over the last 30 years. And Bono's activism is something that we all support and we all stand behind him. We might be in the studio finishing a record and he's off doing something else but it's something that he does very much on our behalf as much as his own.' (Adam)

Disagreements
'U2 is built on disagreement. I mean, it's always been like that and it is a democracy, to an extent and you know, you have to be allowed express your views. And I have to. It's my duty to.' (Larry)