ALL THAT YOU CAN'T LEAVE BEHIND AT 20
Multi-format anniversary edition releases including 51-track Super Deluxe Box.

U2 eXPERIENCE + iNNOCENCE – LIVE IN BERLIN
The complete show on limited edition DVD.

14 September, 2009
Your Blue Room
Bono once called it one of his favourite U2 songs, it was written fourteen years ago but the band had never performed it live - until last night. Take a look.
27
27

25 August, 2009
'The Best Concert Ever...'
She was the star of Bill Carter's award-winning documentary Miss Sarajevo in 1995. When the band returned to the region for the recent show in Zagreb, we tracked down Alma Catel to see how life has changed for her... and for this part of Europe.
5
5

07 August, 2009
'Something I've Never Seen Before'
'We were sharing something that simply never happens at rock shows anywhere. A collective emotional and spiritual surrender of epic proportions.' Gary Lightbody of Snow Patrol was so knocked out by last night's show in Katowice that he sat down and wrote us this piece.
67
67

06 August, 2009
This Instrument Was Calling Out To Me
'It Might Get Loud' starring The Edge, Jimmy Page and Jack White is now playing in cities across North America. Find out where, catch our preview clip... and add your own review.
23
23

'New Year's Day' is the soundtrack to a TV spot from The European Commission, celebrating the 20th anniversary of free elections in Poland earlier this year. The band play Chorzow in Poland tonight.

05 August, 2009
'Super Modern Concentration Camp'
A city under siege, captured in Bill Carter's award-winning documentary 'Miss Sarajevo'. Ahead of the band's return to the region for their shows in Zagreb, this exclusive edit is a reminder of what life was like... not so long ago.
13
13

03 August, 2009
'The End of War'
'Once the music began, no one cared about last names, nations, or religion. All they cared about was the music. The simple celebration of music became a celebration of the end of the war.' A week ahead of U2's Zagreb shows, Bill Carter remembers what it was like when U2 played Sarajevo in 1997... and how a city under siege had become a defining image of the ZOO TV Tour.
25
25

20 July, 2009
U2 and Ireland Funds To Finance National Music Programme
U2 and The Ireland Funds announce today that they will finance a scheme to offer children and young people in Ireland the opportunity to learn a musical instrument and/or avail of vocal tuition. U2 will provide €5m to ensure the national rollout of the instrumental and vocal tuition elements on a phased basis to 2015. The Ireland Funds will begin a campaign to raise a further €2m. 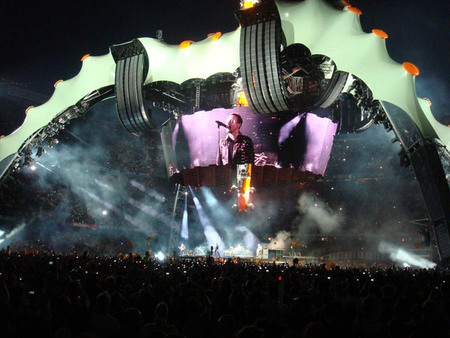 02 July, 2009
Welcome to 'U2's Space Station
Bono calls it 'the space station' and the chances are it came from another planet.

03 June, 2009
Let's Get Together
U2 got together with Senegalese legend Baaba Maal on a Bob Marley classic in London last week... and everything felt alright.
3
3 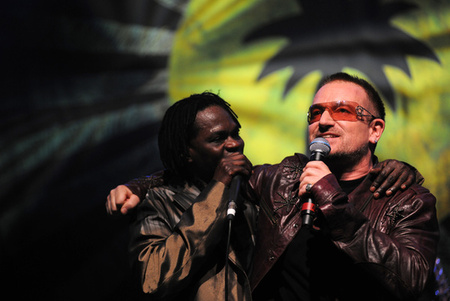 U2 joined Senegalese artist Baaba Maal on stage tonight as part of London's celebrations for Island 50. Baaba and Yusuf Islam (Cat Stevens) were sharing the bill at Shepherd's Bush Empire. The band joined Baaba Maal for a version of U2's 0ne to the surprise of the sold out crowd. 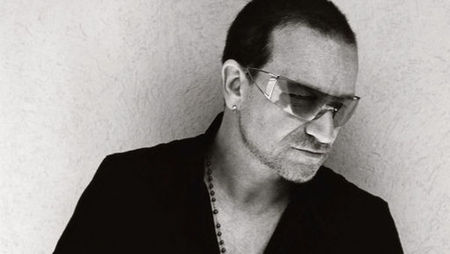 13 May, 2009
Elvis by Bono
Remember American David, Bono's homage to Elvis? The piece was written back in 1995 and was sent out to Propaganda subscribers way back when...

23 April, 2009
Boots Gets Justice
You never heard Get On Your Boots like this. The track's had the club treatment by Parisian remix duo Justice and it's pretty out there.

06 April, 2009
Have You Watched The Album ?
For No Line On The Horizon the band asked longtime photographic collaborator Anton Corbijn not just to take the pictures but also to make a film. The result is 'Linear': not a music video but a companion piece that takes themes from the songs and turns them into a mesmerising road trip. We caught up with Anton to ask him what 'Linear' is all about.
11
11

03 April, 2009
Turn Off The Dark
Bono and Edge joined Julie Taymor in New York a few days ago to preview 'Spider-Man: Turn Off The Dark' which is set to open on Broadway early next year.

25 March, 2009
Linear Thinking
For the new album U2 asked Corbijn not just to take the pictures but also to make a film to accompany 'No Line On The Horizon'. The result is 'Linear'.
1
1

01 March, 2009
'Absolutely Unsnobbish'
'They don't think that any forum is unworthy of their attention.' Brian Eno on the secret of U2's success.

10 February, 2009
Loud in Berlin
Edge and Adam were in Berlin tonight for the European premiere of 'It Might Get Loud'. The pair flew in to Germany for the screening of the Davis Guggenheim directed documentary at The Berlinale, one of Europe's major film festivals

17 October, 2008
Love Comes To Town
Edge and Bono are set to honour BB King and Paul Allen of Microsoft at the Thelonius Monk ...

29 February, 2008
'Ballad' on CD, Today
If you're in Ireland you can get the CD version of 'The Ballad of Ronnie Drew' from today. 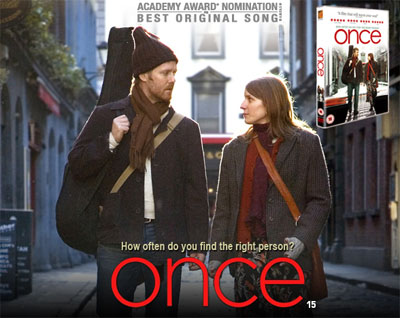