Zooropa: Reasons We Love It

It was going to be an EP, maybe four songs. Some time had opened up on the ZOOTV tour and in February 1993 the band went into The Factory in Dublin for a couple of weeks. Half way through Bono had a thought:  'If we're going to all the bother of making an EP, let's push ourselves and see if we can make a full album.'

And they did and it came out twenty years ago this week. And here's some of the ways in which we love it.  (Tell us the ways you love it, in the comments below.)

That Falsetto. On Lemon.

Unlikely but True. It's a U2 record which took twelve weeks to record.

It's Got Johnny Cash.  The Wanderer is among the finest 'duals' the band have been involved in. 'That voice. It's not a subload. I don't know how he lives, carrying that voice around with him. It's so heavy.'  (Bono, who found the heavy when the band performed The Wanderer in Nashville on U2360.)

It's Mad Good as Opposed to Mad Bad. 'The show would finish at 11.' remembers Larry.' As soon as we left the stage it was straight down into the cars, straigh to the airport, take off. Because the shows were in Europe, normally they were an hour or two ahead, so we'd arrive back in Ireland about midnight, go straight into the studio, do a couple of hours work, go home, go to bed. There were often a couple of days between shows, so we'd go into the studio in the afternoon, work into the night, get up the next day, head to the airport and fly to the next city. There was a month of that. It was mad, but it was mad good as opposed to mad bad.'

It's Got Stay (Faraway, So Close). The bang and the clatter. 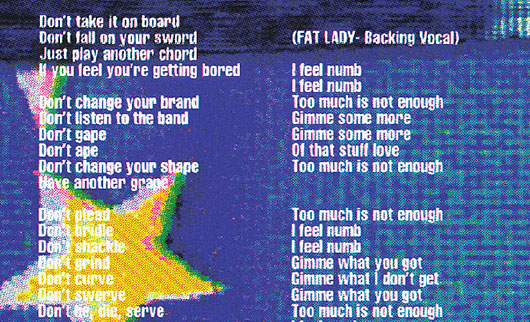 It's Got Dirty Day.  'Iggy Pop was very much an influence in terms of the way he'd make up songs in performance. This is really U2 in its most raw state. I see Charles Bukowski in my head and the kind of advice he gives, like 'Always give a false name.' (Bono on Dirty Day)

Shhhhh.  'After being on the road for a year we wanted something a bit quieter.' (Adam)

It Has Parables. 'The Prodigal Son returns and refuses his father's offer. He goes away and doesn't come back.' Bono on The First Time which started out as a reading of The Parable of The Prodigal Son written for Al Green. 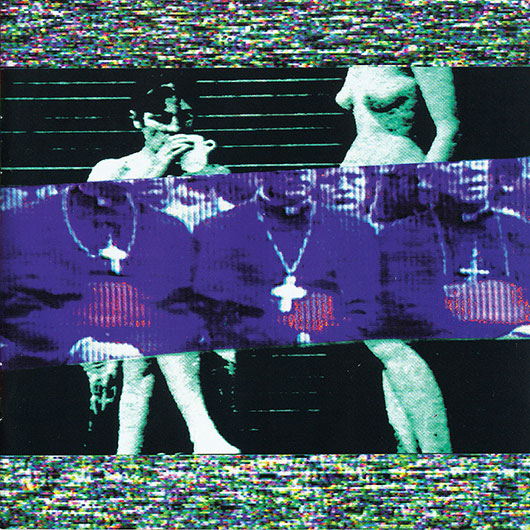 Some Genius Reviews.  'Like a memoir written while the applause is still thundering, Zooropa is a plugged-in, spaced-out dispatch from the blinking LED eye of the multimedia storm.' (Guy Garcia in Time Magazine)

It Was Seriously Mixed Up. The Paul Oakenfold/Steve Osborne remix of Lemon, became a big hit in clubland, the first of several Zooropa tracks to get a DJ/Producer sonic makeover. Two years later Lemon, Numb and Stay were on the tracklist when the band released Melon (Remixes for Propaganda) a limited edition CD for members of the fan club.

Never heard Zooropa? Take a listen on our audio player.

Emergency Broadcasting Network Numb Remix
Comments
68
You must be a logged-in member to add comments.
SIGN IN / SIGN UP
celtmarshall
01 July, 2013
Just class................
they tried something different with zooropa and it worked one of the best albums ever but never noted as a good album.....it was something different that no-one else had the balls to try but they did and it worked...lemon,.,..one of the best bass sounds on any album...cant sell the same old stuff to the same old crowd forever......
pepebasabeleoz1
01 July, 2013
ZooExperience!
This is the record, the tour, the right time...The experience and the force of youth all in one...I love every U2´s record for different reasons, but Zooropa is something else, sounds so futuristic...20 years ago and it looks like just tomorrow!
manu81
01 July, 2013
Zooropa Vorsprung durch technik
Another masterpiece from U2....... My favorite record
kevfly82
01 July, 2013
Zooropa is a GEM, underrated underplayed
Proof that U2 doesn't need 'radio friendly' to create a sonic masterpiece. I have been most artistically inspired by Zooropa more than any other U2 album because it really feels like they were comfortable making music for music's sake. For as different sounding as this album was, it feels like record sales and profits were after thoughts. 'Zooropa' was simply amazing on the 360 Tour. Dirty Day, Daddy's Gonna Pay & Some Days all would've been outstanding too. Dust them off for the next tour!
wendom_earl
01 July, 2013
Zooropa Baby
I loved that they worked Zooropa into the set for the 360 tour. The stage and that song were a perfect fit.
LetMeInTheSound7
01 July, 2013
Incredible
It's so different and that's what makes it amazing. Changing the sound again. Bono as Macphisto is simply stunning, every song on Zooropa is a masterpiece.
santiP
01 July, 2013
All mixed up
Supermodels, Wim Wenders, advertising, Johnny Cash, videogames, television, Bukowski, video remixes, DIrty Day, Mr MacPhisto, William Gibson, drugs ... Could you ask for more?
peach23
01 July, 2013
WHAT... Another U2 Album, so soon !!
We had a friend in the Music industry who invited us down to the launch of this album in Perth and I remember thinking, WHAT!! Another U2 Album so quickly ... These are great times.... And a special invite to hear it as well. How good is this ! It helped that I liked it a lot and it was so different to AB... These were good times :)
Newer comments    61 - 68 of 68    Older comments